The Highlands of Scotland have by far the widest range of flora and fauna in Britain, yet even so there has been significant biodiversity lost due to deforestation and a change in upland land management to large scale sport shooting and deer and sheep grazing that began in the 1700s.

For example, the unique habitat of the Caledonian Forest once covered most of Highland Scotland – a huge wilderness of around 15,000 square kilometres. Today however only around 1% of the original Caledonian Forest remains.

This deforestation has caused a cascade of knock-on effects in addition to biodiversity loss and carbon capture such as the acidification of soils, soil erosion that, in turn, silts up rivers and lochs, loss of salmon spawning ground and flooding.

Trees for Life is a small charity in the highlands of Scotland focused on rewilding (including reforestation through the planting of nearly two million native trees) as well as community support and development established in 1993. In 2021 it launched a nine-year retail bond via Triodos’ crowdfunding platform in order to invest in a rewilding centre that will help generate revenues.

Revenue generation
In 2008 Trees for Life acquired a 10,000 acre piece of land at Dundreggan as a flagship site for its rewilding ambitions thanks to large donations. In the early years the charity struggled to reach the running costs of the tree nursery, volunteering program, centre and land management. Native trees cost from £0.35p to £0.80p per tree depending on species and sapling height while rarer species might cost £1.50.  At the same time, planting costs using hand mounding vary from location to location but tend to be around £0.85 per tree.

Various revenue generating projects were considered by Trees for Life to pay for the costs including running a caravan park and the introduction of hydro or wind energy.

The charity then explored the sale of carbon credits and now uses the Woodland Carbon Code for selling carbon sequestered at Dundreggan through natural regeneration. Its early foray into carbon has enabled the charity to develop a small for-profit carbon credit advisory business using the skills it has gained in its own journey to advise landowners in the Highlands who are wishing to transform their land.

A high carbon price of £28 (Pending Issuance Unit price at December 2021) has been achieved at Trees for Life because of the narrative of rewilding, biodiversity and restoration of land. The charity’s intention is to transfer £10/tonne from each sale to local community organisations to spend on projects that relate to the land and nature.

Now Trees for Life is developing a new rewilding centre at the site to generate revenues that will rely on visitors and tourism. The charity is well-placed to attract visitors as Dundreggan is on the main road from Inverness to Isle of Skye. It is expected to welcome over 70,000 visitors annually by 2030, and benefit the local community and economy by providing jobs and attracting more visitors to the area.

The centre is a £6 million project and in order to develop the budget Trees for Life undertook a scoping stage to gauge what realistic levels of income and profitability could be in order to define the budget.

A consultancy firm was engaged that used an algorithm to determine which paid-for experiences and accommodations could be included to attract the required level of visitors to be able to project suitable incomes. Based on the study, the size of the project was upscaled by £2 million. Costs have been further inflated by the combined effects of Brexit and Covid19 on materials prices, leaving a significant gap to bridge.

To pay for the project, traditional grant funding was available for some charitable activities at the centre, and 10% of the funding has been from Trees for Life’s own money from its carbon credit activities. The major source of funding however is a none-year bond issued via Triodos’ crowdfunding platform.

Retail bond terms
The bond offering was launched 13 September 2021 with a £2 million target and closed less than 48 hours later with the target achieved. The minimum investment was £50 and the bond received an average investment of £4,800. Some 8% of investors are based in Scotland.

The bonds offer a return of 6% a year to investors and are also eligible to be held in a Triodos Bank Innovative Finance ISA which means bond interest payments will be received tax-free. 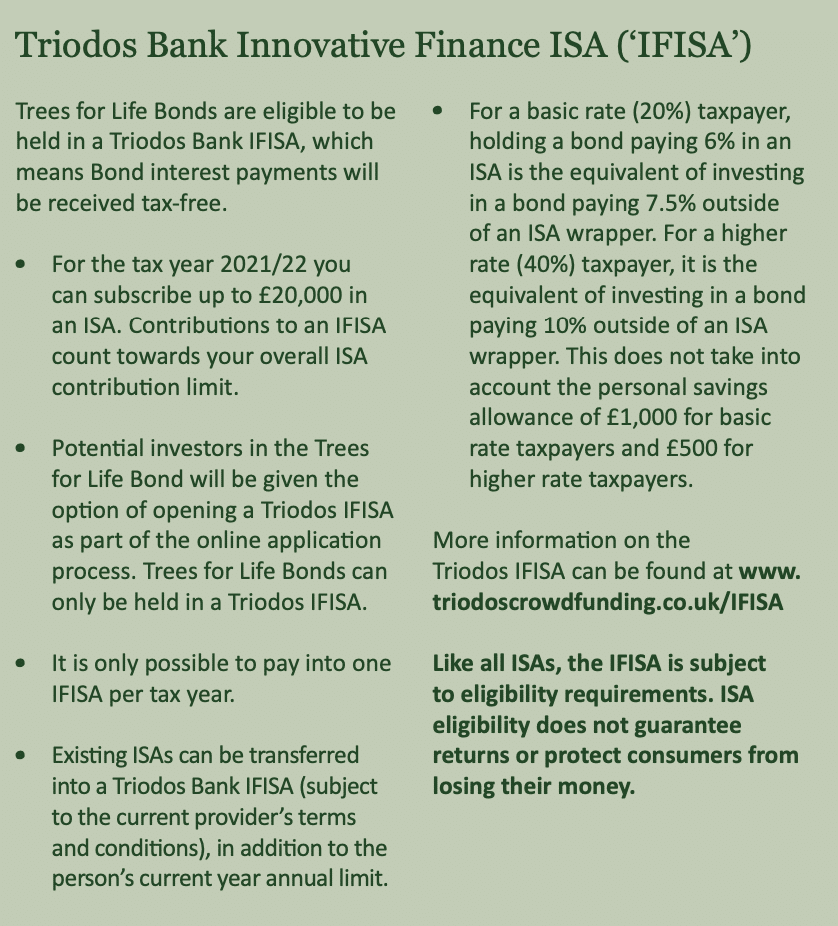 For Trees for Life the debt is repayable in four annual instalments from 2027 to 2030 that will be paid back from cash reserves. The projections assume that the Rewilding Centre will provide a sustainable recurring income for the Charity (some £1.5 million in annual income by 2030).