Washington DC faces considerable challenges when it comes to stormwater runoff. One is that 43% of the District’s land is impervious, which means that a single 1.2 inch storm can produce 525 million gallons of stormwater runoff. The second is the sewer system itself. The sewer system in the centre of the city combines sanitary water with stormwater, which means that during heavy rainstorms, the overflow of water dumps raw sewage into the District’s rivers.

The remaining two thirds of the city has a Municipal Separate Stormwater System (MS4) where sanitary water is treated at wastewater treatment plants and stormwater goes back into the city’s waterways with little or no treatment, taking trash, sediment and other pollutants with it.

The District’s water authority, DC Water, is working on a solution to the combined sewer overflows (see separate case study) but the District’s Department of Energy and Environment (DDOE) was tasked with addressing stormwater run off in the remaining two-thirds of the city.

Unfortunately the capital cost of solving this problem was estimated to be more than $7 billion, when the DDOE only has around $10 million to spend annually. Its solution was to implement green infrastructure retrofits, which would be funded with private investment.

It 2013, it drew up new stormwater management regulations to stop the pollution of the District’s waterways. Under these new regulations, large development sites would have to reduce stormwater runoff by installing new green infrastructure. Developers of projects that caused a 5000 square feet land disturbance, for example, would need to build green infrastructure that retained 1.2 inches of rainwater during a major storm.

The 1.2 inch proposal drew criticism from major developers, who felt this would be a difficult standard to achieve, particularly in parts of the city where it is hard to install green infrastructure on site. So the DDOE decided to increase the flexibility of the regulations by incorporating the use of stormwater retention credits.

In most of the city, developers would be able meet up to half of their stormwater reduction obligation by buying stormwater retention credits from voluntary green infrastructure projects. In the centre of the city, which uses the combined sewer system, developers would be able to meet 100% of their obligation by purchasing stormwater retention credits, as long as those credits were generated from green infrastructure projects implemented in MS4.

The DDOE launched the Stormwater Retention Credit (SRC) trading program on July 19, 2013, is the first of its kind in the nation, and with the new flexibility this offered to developers, the city’s new stormwater management regulations were passed and came into effect in January 2014.

Each SRC has a variable, market-driven price and corresponds to one gallon of stormwater retention for one year. Developers that want to purchase these as a way to meet their stormwater reduction obligations buy them directly from sellers, including non-profits, which generate them by installing green infrastructure on a voluntary basis around the city. As an alternative to buying SRCs, developers can pay a fee to the DDOE, but the current fee is more than twice the price of buying the equivalent amount of credits.

DDOE manages the programme, determines its rules, and tracks the compliance of regulated sites and SRC-generating sites. It also reports on outcomes, both relating to stormwater reduction and the generation and use of credits. Its real-time market registry includes a host of data about these outcomes, and crucially, lists all the of the SRCs currently available for sale

The DDOE also reduces transaction costs for participants in the programme by providing things such as sample contracts and financial return calculators. It also helps businesses to start generating stormwater retention credits by providing grants that help them with the technical design work and their outreach efforts. 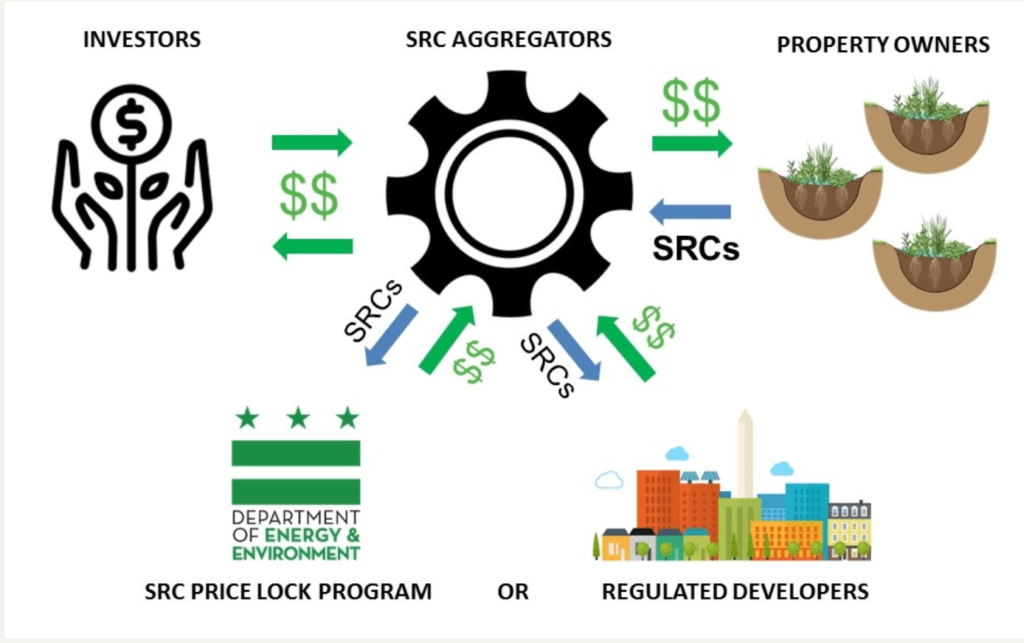 In 2016, the DDOE introduced the Stormwater Retention Credit (SRC) Purchase Agreement Program, which gives property owners and others who voluntarily install runoff-reducing green infrastructure in MS4 the option to sell SRCs from these projects to the DDOE for a fixed price. This further mobilized private capital into the programme by providing more certainty on the return a green infrastructure investment will provide.
The DDOE is investing $12,75 million in the purchase agreement programme, with the lion’s share going to SRC purchases, and $500,000 reserved to support technical and outreach work by SRC generators to identify cost-effective green infrastructure sites.

Washington DC’s Stormwater Retention Credit programme provides a model for how cities around the world can harness private investment to address the problem of stormwater run off. The establishment of Washington DC’s SRC trading program and the subsequent purchase agreement programme have increased stormwater retention, restoring local water bodies, maximised cost savings and flexibility for regulated developers, and with the installation of more green infrastructure, created new green jobs and new green spaces in the city, benefitting local communities.

For its part, the DDOE would like to remove itself as a funder of green infrastructure projects entirely. Its long-term objective is to retrofit the entire MS4 area of the city with privately funded green infrastructure, and reach the point where the regulated demand for stormwater retention credits replace the need for DDOE to act as a buyer in the market at all.