Forests in Ireland are relatively young in comparison with other EU forests. The majority of the forest estate was afforested over the past fifty years, with a large area of the private sector in the Republic being planted over the past twenty-five years. In the 1980s the introduction of a generous EU- and State-funded grant and annual income payment (‘premium’) programme encouraged a large increase in private afforestation by farmers. The area of privately-owned forests increased fourfold from the 1970s to the present day and at approximately 380,000 ha now make up approximately half of the country’s forest area. These farm forests are small in size – on average just 8 hectares – but large numbers of these small parcels have come up for sale as the grant and premium contracts have ended.
This provided an opportunity for SLM Partners, an asset manager with $200 million under management that has more than a decade’s experience investing in ecological forestry and farming systems.

It set up a real assets fund, SLM Silva Fund in 2018 to purchase land and transition it from conventional forestry to continuous cover forestry (CCF) which is a more sustainable and nature-friendly forest management system.

Unlike conventional timber operations, trees of different ages and species are allowed to grow in the same plot more closely mimicking the biodiversity and structure of natural forests. Trees are then harvested selectively through regular thinning operations, leaving perpetual forest cover, rather than relying on clear felling and replanting. They system relies on natural regeneration which over time will bring greater species diversity and resilience to climate change-induced storms, droughts and pest and disease attacks. As permanent forest cover is maintained, tree growth rates are high, soil and deadwood carbon pools are protected, and the forests produce a higher proportion of long-lived higher value logs suitable for making construction timber, the forests are more effective carbon sinks than conventionally-managed forests.

Financially, while management costs are higher than conventional forestry, thinning costs are lower, replanting costs are lower or eliminated altogether, and the forests produce a stronger regular cash income and more higher value sawlogs, meaning the net result is higher profitability. Risks from windthrow, fire, and disease are also mitigated. Moreover, given the more regular stream of wood coming out of CCF forests, investors can ride out economic cycles more easily rather than having to harvest all the wood at pre-defined times, which might coincide with a recession and lower timber prices. 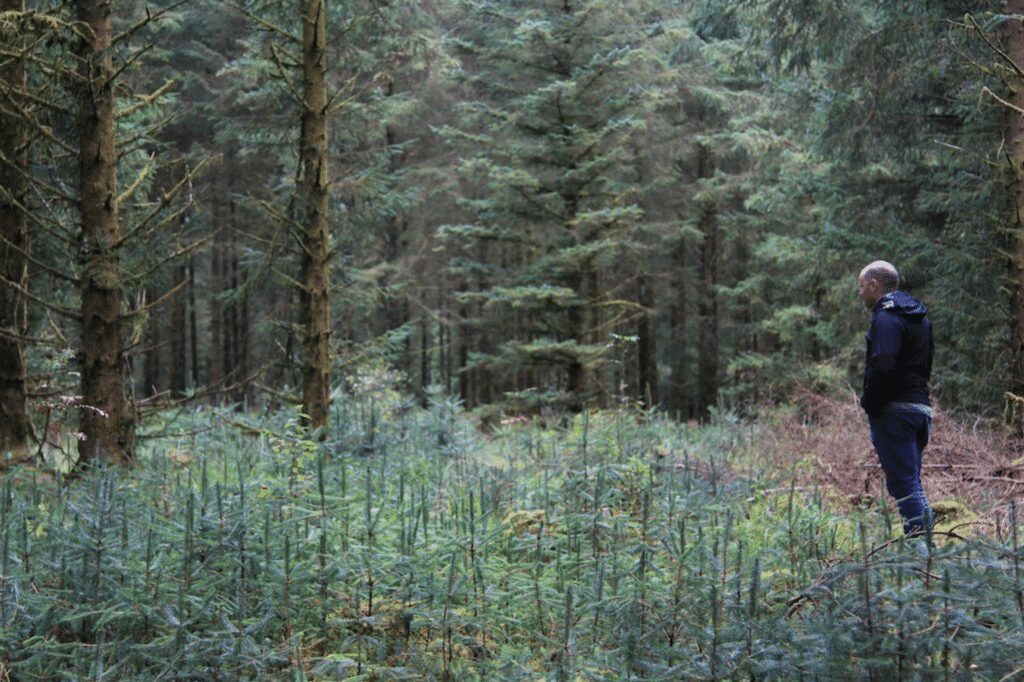 Fund structure and strategy
While institutional investors have an appetite for the low risk/low return and highly illiquid characteristics of forestry, direct investments into lots of small parcels of land is not a viable strategy for them, and they need to partner with professional investment managers such as SLM Partners, who can act as an aggregator, doing the leg work to build institutional-scale portfolios of small properties to benefit from economies of scale.

The SLM Silva Fund strategy is to buy up semi-mature forests and begin the transformation process to CCF, but the Fund also acquires mature forests which have passed the point of transformation, and clearfell and replant these with a more diverse species mix and begin CCF management with the new rotation. The Fund expects to transition 100% of its forests to active CCF management in this way over the life of the fund. Forestry management services are provided by an Irish forestry company, Purser Tarleton Russell Ltd (PTR), who have over a decade of experience of managing forests under CCF in Ireland.

Investors in the fund include the EIB Natural Capital Financing Facility that also provided a €750k technical assistance grant to the Fund, pension funds, insurance companies and family offices. Many of the family office investors are strongly impact-focused and are attracted to the environmental benefits of continuous cover forestry (CCF).

The technical assistance facility is starting in January 2022 and will cover a range of activities from CCF training to harvesting contractors and forest managers, to develop biodiversity monitoring indicators, carry out forest inventory and data analysis in CCF forests to develop better growth and yield models, work on a CCF carbon methodology, deer management to promote natural regeneration, and work on soil microbiology and whether it is possible to inoculate soils on afforestation sites to speed up seedling growth and reduce mortality.

Now that the Fund has built up a portfolio of 1,500 ha it is also preparing for FSC certification. As well as providing independent verification of good forest management, certification should bring tangible market benefits in terms of greater demand and higher prices for its timber. Many of the sawmills in Ireland have been scrambling for FSC supply as timber sales by the FSC-certified state forest company, Coillte, have been disrupted and very few private forests are certified. Over the next five years Ireland’s private forests will overtake Coillte as the largest source of timber for domestic mills for the first time in the country’s history, and certified timber will be in strong demand.

The Benefits of Continuous Cover Forestry
Continuous cover forestry is rising in popularity as rotational forest management has come in for increasing criticism due to damage to biodiversity, soils, water quality, and its negative impacts on forest carbon storage, climate change resilience as well as landscape and recreational values. The assumed higher economic performance of rotational forest management (RFM) over alternative management systems has also recently been challenged.

Appetite for CCF has increased in Ireland and in several countries across Europe as governments to look at solutions to biodiversity loss and climate change.
While little data has been collected on CCF, a research paper published in Forestry in August 2021 (cited in sources below) highlights the knowledge gaps and perceived obstacles that have prevented CCF from being more widely adopted. The report estimates that only some 22% to 30% of forests in Europe to be managed through CCF, although in some countries like Slovenia it is the norm, and in several countries while state forests continue to be managed conventionally, a majority of private forests have moved over to CCF. The report highlights that one obstacle to wider adoption of CCF is that subsidies have favoured RFM.

“A problem that has been noted on several occasions (e.g. Wilson, 2013) is that the national financial support available to private landowners and foresters from forestry grant schemes has generally been designed to support activities characteristic of RFM as compensation for incurred costs (e.g. planting, site cultivation) .
The success of these activities can usually be evaluated within 3–5 years, which means that they can be easily accommodated within the framework of payments made under the EU’s Common Agricultural Policy (B. Callaghan, Scottish Forestry, personal communication).
In contrast, management costs that can be directly reimbursed are often minimal in CCF. Furthermore, management activities undertaken under CCF such as thinning to promote the development of natural regeneration can take a decade or more for their success or failure to be evident. For this reason, financial support for implementing CCF has often been confined to capital grants for measures such as improving infrastructure for access within forests (Puettmann et al., 2015).”

The report highlights, however, that the tide is turning. A recent scheme in Ireland, for example, provides three-staged payments of 750€ per hectare over a 12-year period to support a range of management activities associated with CCF such as management planning, tree marking and improvement, thinnings and promotion of natural regeneration -all under the supervision of an approved forester skilled in CCF. Similar schemes exist in Switzerland and Germany. “Given that one reason for increasing the proportion of forests managed by CCF is to enhance the provision of a range of ecosystem services, then consideration of paying forest owners and managers for achieving a desired silvicultural objective through CCF could be explored further,” says the report. 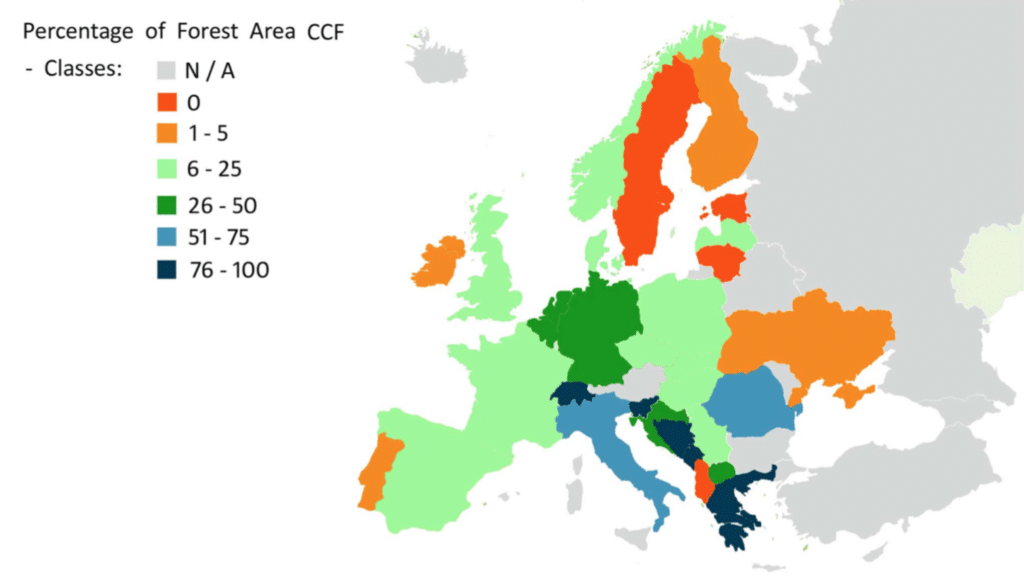 The recently published EU Biodiversity and Forestry Strategies include explicit support for CCF and encourage its wider adoption. And SLM expects that CCF will become more commonplace in Europe in the coming decades driven by climate change imperatives, increased awareness of the economic benefits and supported by changing regulation and government financial incentives to make the transition.

The Silva Fund is close to full deployment and has generated double digit returns for investors since its launch. The fund raised €30m from investors against a target of €50 million but the company is sanguine about this. ‘The Fund was too small for many institutional investors, so we made the decision it was best to close the fund at €30m and build a successful track record, then go back out to raise a larger fund in future’, said Darius Sarshar, Investment Director at SLM Partners.
He continues: “Aggregation strategies are hard work, and it takes time to deploy capital. The company is now raising capital for a new fund, that will invest in CCF across Europe. We are replicating what we are doing in Ireland across several other carefully selected countries, and also making investments in permanent tree crops using regenerative agriculture, combining the two main areas of our expertise. In that way, we are able to offer a fund that has the scale to be attractive to a wider pool of institutional investors.”