As greenhouse gas emissions rise, severe weather events increase in both severity and frequency. The number of weather-related disasters increased five times between 1970 and 2020. On average, each of these disasters killed 115 people and caused $202 million in damages [1]. Climate adaptation is therefore needed to make communities and ecosystems more resilient.

In 2018, Swiss Re – one of the world’s largest reinsurance providers – helped to launch the world’s first insurance solution to preserve a natural ecosystem. The parametric insurance model provided helped maintain Mexico’s Quintana Roo reef and, by extension, the community that relies on it.

The claim payment release is triggered when hurricane wind speeds reach certain levels in a defined area, known as the ‘covered area’, indicating a severe storm has occurred. It allows the policy holder to rapidly deploy resources to support recovery of the reef, which minimises economic damage and further ecological degradation. This index-based cover avoids the longer wait times that are typical of traditional indemnity insurance, which requires verification of losses before claims can be made.

Importance of the Reef

The policy covers roughly 100 miles of coastline, including several Mexican municipalities and their towns – such as Cancún, Puerto Morelos and Playa del Carmen. This reef area forms part of the larger Mesoamerican Barrier Reef, which stretches nearly 700 miles across several countries in the Caribbean, and is the second largest barrier reef in the world.

The reef provides the Quintana Roo area with several benefits. It is fundamental to the area’s tourism industry, which earns at least $10 billion every year. In addition, a healthy coral reef can reduce up to 97% of a wave’s energy before it hits the shore [2], which mitigates both storm-related damages and daily coastal erosion.

However, the reef itself is vulnerable to damage. Since 1980, 80% of the living coral along Mexico’s Caribbean coast has been lost or degraded by pollution, disease, overfishing or storms [3]. This reduces a reef’s protective ability.

The project was first conceived by The Nature Conservancy (TNC), which completed an economic risk analysis in 2016 and found that storm damages to buildings along the coastline could triple with the loss of the reef [2]. TNC then decided to find a way to insure the reef based on its economic value to the region. 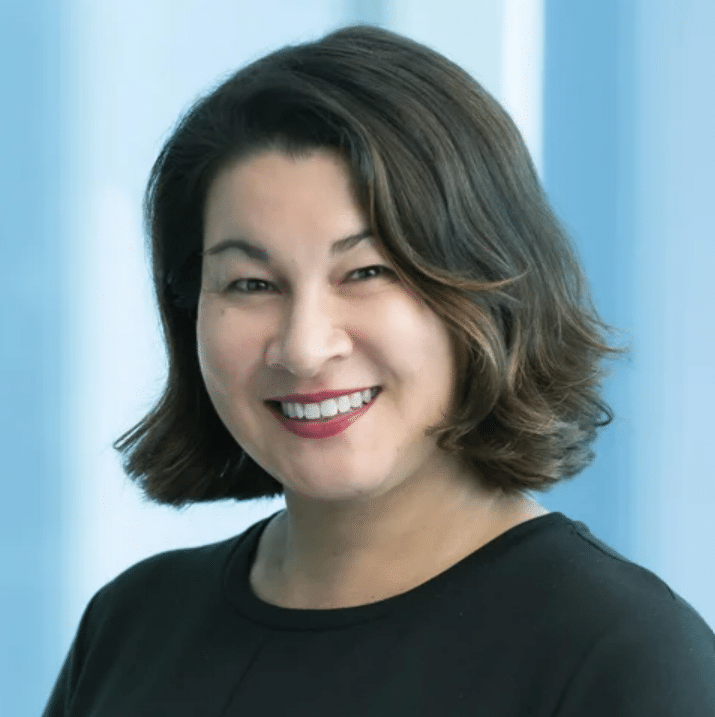 Cherie Gray, Global Lead for Sustainability & Market Development, says that Swiss Re was invited by TNC to help develop a solution due to its experience in comprehensive disaster risk financing and insurance strategies, particularly regarding index-based (parametric) insurance, where payments are linked to a pre-determined indicator.

There are several stakeholders involved in this parametric insurance structure and deployment:

Coastal property owners were first engaged by TNC in 2016 via the Cancun and Puerto Morelos Hotels’ Association. Gray says the influence and aggregation benefits of the Association were key for engaging with the local stakeholders.,

The property owners pay federal taxes for the use and exploitation of coastal areas via an existing beach lease structure on an annual basis. These fees are collected by the respective municipal governments, and a portion of those are then passed on to a Trust fund created by the State Government of Quintana Roo. Gray comments: “Working with the government parties allowed us to leverage their existing tax structure. However, the creation of the Trust ensures both public and private sector interests are maintained.”

The funding is passed to the Coastal Management Zone Trust (CMZT), a trust fund that was founded in 2018 by the State Government. The CMZT receives different types of funding, including the property owner fees, government, and philanthropic grants. It is governed by a technical committee formed of government officials, scientific experts, NGOs, hotel association representatives and TNC. The Trust decides how these funds are best spent to protect the reef and its beaches.

The CMZT has contractual obligations with two entities that support the reef’s protection:

The first is with the insurance companies, which provide the parametric insurance policy. This policy is triggered when winds reach a minimum of 100 knots (roughly 115 mph) within the insured area, and payments vary according to wind strength. The funds are paid within three weeks, which enables reef and beach restoration work to be undertaken quickly. This minimises both the damage to the reef’s coral structure and the disruption that the hotels face from the beach debris. The policy was initially provided by Seguros Afirme and Swiss Re Corporate Solutions, and since been renewed elsewhere, showing the market development.

The second is the reef restoration team, known as the ‘Brigade’ that is made up of divers, tour guides, fishermen, marine biologists and other scientists, mostly on a volunteer basis. When the payments are triggered, the CMZT sends the Brigade out to assess and act on damage to the reef. Restoration activities include reattaching pieces of broken coral to their original structures, collecting fragments to seed new colonies, and clearing debris from beaches. 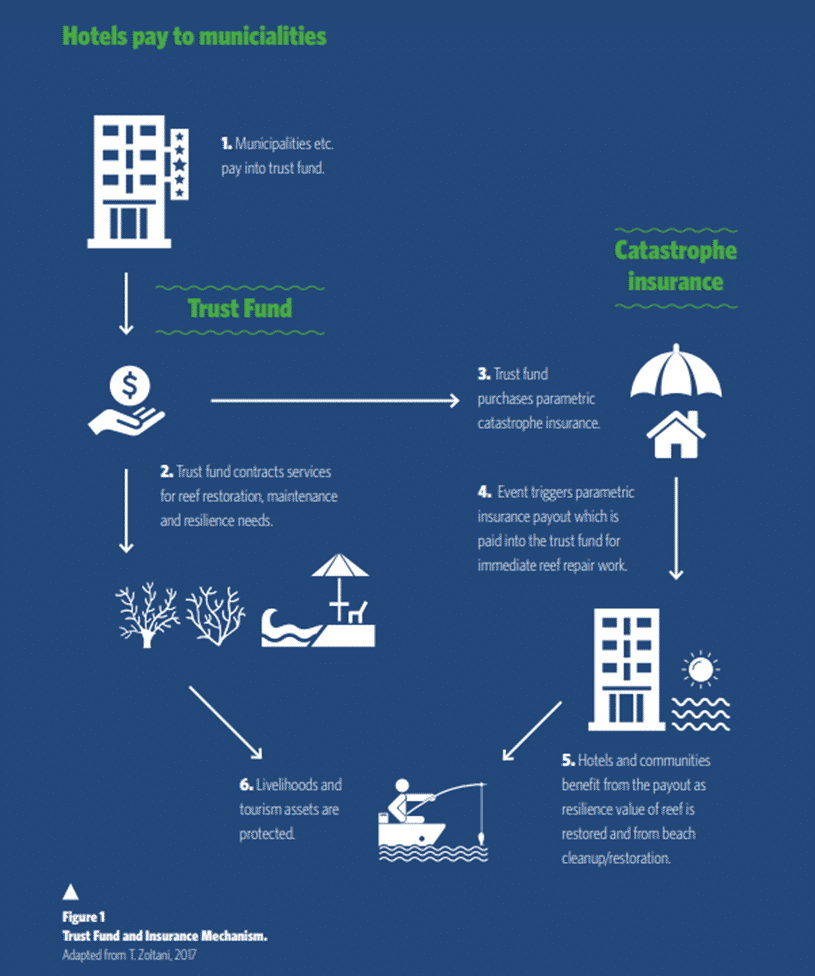 No performance or outcome data is publicly available on the insurance policy. However, the policy was notably triggered in 2020 when Hurricane Delta hit the covered area as a Category 3 storm. An $800,000 payment was made, which enabled roughly 80 Brigade members in the Puerto Morelos National Park to act on the damage within a week. The team stabilized 1,200 large coral colonies that had been displaced, and transplanted 9,000 broken coral fragments. Efforts on a smaller scale also took place in Cancun, Nizuc and Isla Mujeres Reef National Park [4]. Personal accounts from Brigade members during this time can be read here.

As the policy is the first of its kind, several challenges arose during its inception and ongoing delivery.

Firstly, as parametric insurance is a pre-agreed contract, there is basis risk. This is where the pay-out may not equate to the actual losses or assumed costs (it could be more or less). This presents a risk of a funding shortfall, compared with traditional indemnity insurance that relies on onsite loss assessments. However, there could also be a surplus of funds that can be reinvested or used for additional resilience building activities.

Secondly, sustainable funding and commitment to ongoing insurance is important. Insurance policies are usually for terms of one year, however multi-year policies are an option, so need to be budgeted for as a regular cost item. Since first launching, Gray says that due to new stakeholder inputs, the policy, budgets, and area covered have all been reshaped. Reducing the premium has also meant the coverage has been reduced, and hence exposure to risk increased.

Gray says that since launching this innovative design, Swiss Re is working to replicate this model elsewhere in the world. This includes coral reefs but also other types of natural ecosystems, such as mangroves, which are estimated to prevent $65bn in property damage from coastal storm every year [5].

Building on the Quintana Roo Reef Insurance, the Mesoamerican Reef Fund, which targets restoration work across the entire Mesoamerican Reef, announced last year that it would adopt this model for other areas across the reef, working with Willis Towers Watson, InsuResilience Fund and AXA Climate [6].