Belize is a country rich in natural capital and its barrier reef, the second largest expanse of coral in the world, is host to a wide variety of marine life. This was one reason why the country attracted nearly 1.7 million tourists in 2019, but in 2020, Belize’s tourism industry was hit hard by the Covid-19 global slowdown. The country’s economy contracted by 16.7%, its debt increased to 133% of GDP, and its superbond, a $553 million Eurobond that represented all of its commercial debt, was trading at around 38 cents on the dollar because the country had suspended payments to bondholders. The government of Belize needed to refinance its superbond, but also wanted to fund critical ocean conservation, so it began talking to The Nature Conservancy (TNC), the world’s largest conservation organisation, about a way to achieve both objectives. Through its Blue Bonds for Ocean Conservation Strategy, TNC was working with a number of countries to refinance a portion of their national debt, reduce their debt burden and use the savings to fund conservation activities. 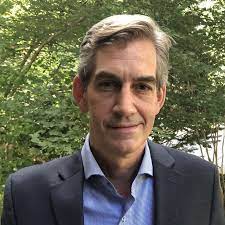 TNC had a long relationship with the Belize government and understood its conservation and refinancing needs. “We had known that they needed a [debt] solution because we have office on the ground and we’ve been there for three decades,” said Kevin Bender, Senior Director, NatureVest, the impact investment arm of TNC, in a recent podcast with GFI Hive. “We had also been working with them for years on their ocean conservation goals,” he said. So TNC proposed a debt conversion, through a series of back-to-back transactions, which would enable the Belize government to address both.

In November 2021, TNC and the Belize government announced the completion of a $364 million debt conversion for marine conservation, the world’s largest debt refinancing for ocean conservation to date. The complex transaction enabled Belize to repurchase its superbond at 55 cents on the dollar, reduced the country’s debt by 12% of GDP, created long-term sustainable financing for conservation, and created a commitment to protect 30% of Belize’s ocean, among other conservation measures. Belize could not borrow the funds in the market to repay its existing bondholders, because the interest rate would have been too high to create savings, so instead TNC arranged a $364 million blue loan between the Belize Blue Investment Company (BBIC), a TNC subsidiary, and the Belize government, which allowed the country to repurchase its superbond.

Because the transaction directly funded marine conservation, BBIC secured a credit enhancement for the blue loan from the United States International Development Finance Corporation (DFC), which in turn, allowed BBIC to fully finance the loan through blue bonds issued by Credit Suisse. Credit Suisse issued the blue bonds, which obtained a Moody’s credit rating of Aa2, through a repackaging vehicle that the bank subsequently syndicated to institutional investors globally. “With the credit enhancement, the blue bonds were very highly rated and very low risk. That took us from a very small investor base of high risk emerging market investors into the gigantic world of pension funds and insurance companies that buy double-A paper,” said Bender. “Within that universe, we could target the investors that are really focused on ESG to help us drive down the spread.”

The blue bond syndication received high interest from investors, was multiple times oversubscribed and BBIC was able to pass on this cheaper cost of funding to Belize. The blue loan to the Belize government comes with original issue discount and a coupon that steps up on a semi-annual basis, starting at 3% in April 2022 and going up to 6.04% from April 2026 onward. This structure reduces the country’s near-term debt payments and makes its debt much more sustainable. The 19-year loan also has a grace period on principal payments for 10 years. Hurricanes and large storms are a risk to the Belize economy and to government revenues, so the blue loan structure also incorporates the world’s first commercial sovereign debt catastrophe insurance cover. The parametric insurance policy, designed by Willis Towers & Watson and underwritten by a Munich Re subsidiary, provides coverage for blue loan coupon and principal payments following an eligible hurricane event in Belize. This innovative debt conversion created both immediate and longer-term fiscal savings for Belize. It cut $189 million in principal from its outstanding debt and reduced its debt service costs by $200 million over 20 years. It also avoided a $58.4 million principal reinstatement, part of the agreement from a previous restructuring of its superbond that would added back this amount to the country’s debt if it defaulted. After the transaction, Standard & Poor’s upgraded Belize’s unsecured foreign currency credit rating from Selective Default to B-. 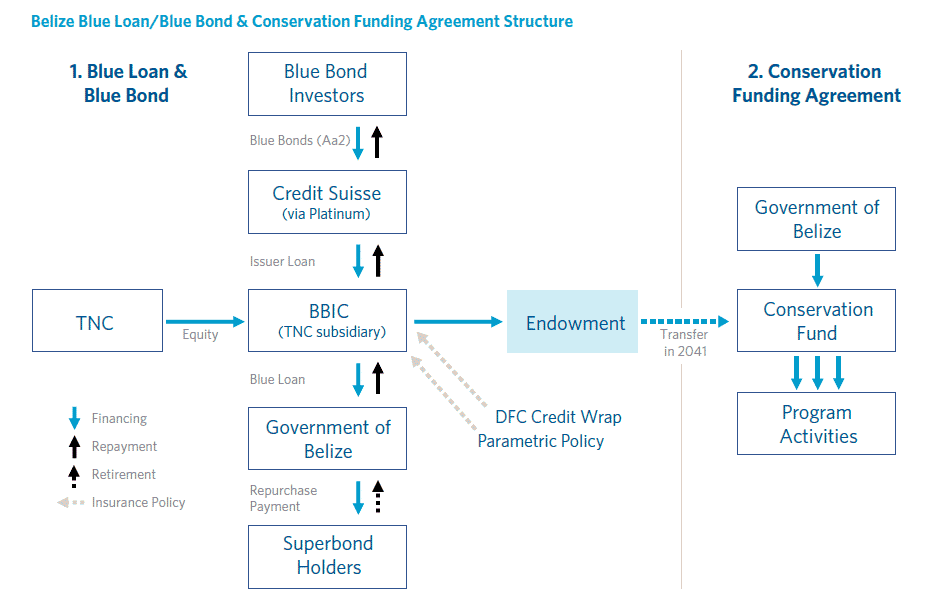 This innovative transaction, which won the sovereign sustainability bond of the year and the award for sustainability bond structure innovation at Environmental Finance’s 2022 Bond Awards, set a number of important precedents. While previous debt-for-nature swaps were typically less than $50 million and refinanced bilateral lending, the Belize debt conversion proved that countries with need to restructure sovereign debt and fund conservation can refinance their external commercial debt at scale in the capital markets. In doing so, they can tackle what is often a country’s most expensive debt, with higher interest rates, and avoid negotiating write-offs from official bilateral creditors. Yet this transaction probably would not have happened without TNC’s on-the-ground involvement. Its role in arranging the debt, negotiating the conservation commitments, leading the marine spatial planning, establishing the conservation fund, monitoring and reporting on the conservation milestone achievements, and enforcing any fees on missed milestones for 20 years assured all participants of the financial integrity of the deal and that the conservation outcomes will be achieved. “It was really all the moving parts that made this so complex, but that’s where an entity like NatureVest needs to exist,” said Bender. “This is not just a Wall Street investment and not just a development bank-type structure.” He said this blended finance structure, combining results-based financing with a very deep conservation commitment, required conservation, science and finance expertise and NatureVest and TNC had all three. “We could sit in the middle and handle all these things, which I think leads to a much stronger product,” he said. Now that it has been done once, Bender believes this model could be replicated by other countries with debt restructuring and conservation needs. “I think the market is killing itself to figure out solutions and the investor base is there, “ he said. “There’s money to be made from Wall Street banks arranging these things and there’s high interest, on the blended finance side, from development banks and governments to be involved. So it’s just a matter of getting governments to figure out what they want to do and walking them through how to structure that. I think there’s unlimited potential.”