Unnaturally dense and homogenous forests, resulting from years of commercial logging and fire suppression, can lead to disease outbreak, a degraded watershed, stunted biodiversity and catastrophic wildfire risk. The California wildfires of 2020/21 were one example of how these risks can materialise on a massive scale.

Activities such as mechanical thinning, along with prescribed burns and meadow restoration can prevent some of the above risks and restore forests. It is these activities that Blue Forest Conservation’s Forest Resilience Bond – a blended finance structure that provides funding to carry out risk mitigating activities – solves for.

Zach Knight, co-founder and CEO of Blue Forest Conservation (Blue Forest), highlights the challenge of financing that the Forest Resilience Bond (FRB) addresses. “Government is increasingly recognising the need for funding; a recent bipartisan infrastructure agreement has made a one-off $3bn sum available, but the Forest Service estimates that $80bn a year is actually needed to restore forests across the US. Stakeholders are increasingly aware that this is not a science problem, it is a finance problem”

Blue Forest was originally founded by a team of students at UC Berkeley’s Haas School of Business, who developed the concept of the Forest Resilience Bond in 2015 as part of the Kellogg-Morgan Stanley Sustainable Investing Challenge.

The team recognised multiple beneficiaries would pay for forest restoration and prevention, such as utility companies, local government and forestry organisations, which would therefore provide a repayment model that could attract private lenders or investors. Investors themselves could achieve a market rate return as well as benefit themselves from the reduced wildfire risk, such as insurance companies.

Switching from for-profit to non-profit to engage beneficiaries

In 2015, Blue Forest established itself as a for-profit organisation and selected the Yuba watershed in the Tahoe National Forest as its first project – around 15,000 acres that had not experienced significant fire in the last century.

Blue Forest first approached the US Forest Service as an integral stakeholder, which manages 193 million acres of forest and grassland in the US and also develops restoration plans. While the Forest Service recognised the benefits of the FRB, there were concerns about the involvement of private finance. For example, the Service’s annual budget cycle was not conducive to committing to a multi-year reimbursement agreement, nor could it legally benefit from private investment. A second beneficiary (the California Department of Forestry and Fire Protection) expressed similar barriers.

Blue Forest realised that a not-for-profit structure would better serve the needs of the public sector beneficiaries for legal and operational reasons, they converted their entity status soon after they started engagement with them. 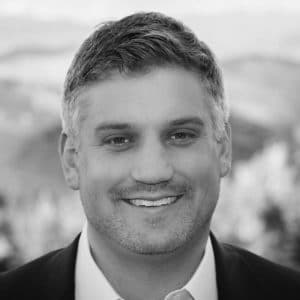 However, Blue Forest were keen to implement a structure that drew on project financing structures that were familiar in the private investment market by establishing Special Purpose Vehicles (SPVs) for each restoration project. The SPV was created as a wholly owned subsidiary by Blue Forest that would receive funds from the investors, passing these onto the implementation partner, which itself had formal agreements with the Forest Service and the California Department of Forestry and Fire Protection (see implementation section below). This meant that the Forest Service and California Department of Forestry and Fire Protection had no legal connection to the SPV, allowing them to act as beneficiaries.

For the third beneficiary, Blue Forest engaged the Yuba Water Agency (YWA), a water utility provider that directly benefited from the ecosystem services that the healthy forests in the Yuba watershed provided. These services were primarily water irrigation, hydropower generation and flood control. Economic analysis conducted jointly by Blue Forest’s partner (World Resources Institute) and YWA showed that the project would deliver large net benefits to YWA from things like the protection of their hydropower generation and reduced wildfire risk.

Determining the share and method of payments for the project was challenging, says Knight. Originally, Blue Forest considered a pay-for-performance model, which ties the amount and frequency of repayment to environmental outcomes, such as soil quality or water run-off (See GFI case study on the DC Environment Bond as an example)

However, the pay-for-performance structure was removed due to the complexities of tying environmental outcomes to payment agreements. Explains Knight: “Beneficiaries and investors preferred not to include the pay-for success model and instead opted for fixed repayments based on the economic value of the environmental outcomes that would be delivered, which reduces risk for investors and ultimately lowered the cost of capital for investors”

Investor repayment of the FRB is instead tied to ‘repayment milestones’, such as federal and state funding that is reimbursable upon project completion. In this sense, the Forest Resilience Bond is not a financial bond, but a fixed repayment lending structure.

The payment agreements totalled $4.0m and were structured over a maximum of five years, including those with:

As well as grants from public entities:

A separate implementation partner was necessary for the structure, which would manage the contracting for the restoration work; Knight notes that while “you can’t lend private funds to a federal agency, you can lend to its partners.”

When Blue Forest first engaged with the Forest Service, it was already looking to outsource the project implementation aspect as public funding for this work grew. The National Forest Foundation was the chosen entity – a congressionally chartered non-profit partner of the Forest Service. Says Knight “It was an operational shift that made the financing work in a more fluid way.”

The National Forest Foundation receives 0% interest loans and grants from the SPV to hire local contractors on the ground. It then receives grant reimbursement from the federal and state agencies once the completed work is verified, then repaying these to the SPV when required.

This structure also solves a key financial barrier that many smaller local contractors face in forest restoration; local contractors can often wait up to six months for federal and state funding to be reimbursed for completed work, leading to a working capital shortage. The private investment that the FRB leveraged helps to bridge this gap, and therefore support local contractors.

Finally, the Forest Service also has a stewardship agreement directly with the National Forest Foundation. This allows the value of products (e.g., sellable timber) to be used to pay for service work. It enabled the Forest Service to enter into projects for longer timeframes of up to 20 years.

Within the structure, the Forest Service is project planner and overseer, the National Forest Foundation acts as the implementation partner, and Blue Forest acts as the financial sponsor and managing partner. 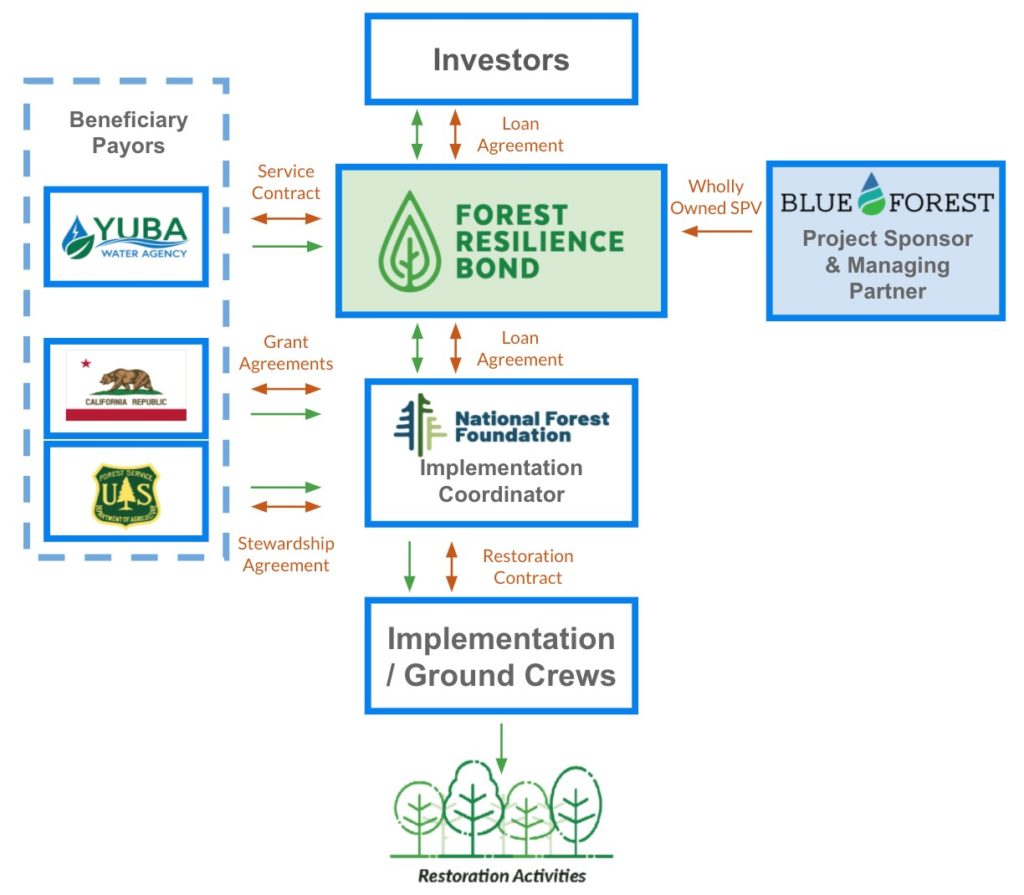 As part of the blended finance approach, Blue Forest turned to concessionary investors willing to take below-market returns. It secured investment from the Rockefeller Foundation and the Gordon & Betty Moore Foundation, which had been initial project development funders.

For the commercial investors, Blue Forest approached CSAA Insurance. From a risk mitigation perspective, CSAA insured thousands of customers living in the area who were at risk of wildfire, and therefore the work would reduce the risk of insured losses. CSAA was also looking to diversify its investment portfolio with ESG-aligned activity and predicted that the FRB would be a repeatable proposition as it gained market traction.

Calvert Impact Capital was the second commercial investor – an impact investor that was looking to support market building transactions, which also provided support on some of the key documentation of the transaction.

In total the investment consisted of:

Payments on both capital and interest were agreed, making this an amortising loan.

To ensure deal integrity, Blue Forest wanted to make sure that there was no undue influence from investors. The US Forest Service determined the priority restoration locations and treatments before Blue Forest engaged with investors and finalised the project plans before taking commitments from the capital.

For this first project, Blue Forest spent over 18 months determining the contracting process to meet requirements of private investors, foundations, and government agencies – some of whom had never worked with private investors previously. Knight remarks that their second project completed more quickly with the replicable structures they had developed.

A key learning as part of this process relates to the marketing period, which Knight remarks was too short. “For the second FRB, our marketing period was probably open for about a month before we were oversubscribed, which means we might have missed investors that could have been great partners.”

The bond formally launched in October 2018, and restoration work started in 2019.

The project timeline has been delayed due to the 2021 fire season, and is now expected to finish by 2023 – still far shorter than the 10 years it would have taken to complete the restoration without the FRB.

All amortising repayments to investors have been made in line with their contracts.

In terms of measuring outcomes, the FRB is aligned to eight of the UN Sustainable Development Goals, and reports on 17 metrics that detail outcomes of the work. According to Blue Forest’s 2020 impact report, $1.28m has been invested in ecosystem restoration, leading to:

Remarks Knight “what really makes this work special is not the financial innovation but the scientific innovation that allowed measurement of environmental outcomes not previously considered by financial actors” This allowed credible engagement with both the paying beneficiaries and investors.

The success of the first Yuba project led to a second SPV to be launched in the same area (FRB Yuba Project II), with the same partners and contract structures to scale up restoration work from 6,000 to 35,000+ acres with $25m of financing over a five year period. The marketing period closed in October 2021 and restoration work started soon after.

In the longer term. Blue Forest plans to scale the Forest Resilience Bond across North America to manage projects and aggregate these as part of a larger fund structure, in order to draw in wider institutional investors. It is currently developing a project pipeline with six projects planned over before 2026.

Listen here to Zach Knight share about the project in Episode 11 of Financing Nature.