Despite efforts by the Irish government, and later the EU, to increase Ireland’s forest cover from its low point of 2.8% in 1928 to 11% today, Ireland still has the lowest forest cover of any EU country.

Within that forest cover, native Irish species account for only 18%, and around 75% of Ireland’s trees are thought to be less than 30 years old, meaning that their carbon sequestration and biodiversity benefits are relatively low.

Coillte is a commercial forestry business that is owned by the Irish state and manages more than half of Ireland’s forests. Recognising the need for more permanent and native woodland, Coillte teamed up with Forestry Partners in 2019 to form The Nature Trust, a not-for-profit subsidiary that aims to deliver ambitious re/afforestation across some of the 70,000 hectares held in Coillte’s land bank.

Rather than relying on public funding, Coillte wants to engage corporates, investors, philanthropists and consumers to help with the delivery.

Also in 2019, Coillte began conversations with Bank of Ireland (BoI) and Paul Harris, a senior dealer in BoI’s Corporate and Institutional Sales team. Harris has 15 years’ experience in environmental finance and a knowledge base in natural capital, having been vice-chair of the Irish Forum on Natural Capital.

Drawing on this experience, Harris and his team helped Coillte and Forestry Partners to identify three distinct benefits, and therefore returns from re/afforestation that would attract private investment in order to pay for the capital expenditure required to acquire land and plant trees:

To assess the carbon sequestration value, BoI used the Woodland Carbon Code calculator that gives the sequestration value of a woodland over a 100-year period. In order to make this a marketable product, the BoI and Nature Trust condensed the time horizon to 25 years, with measurement and verification occurring five times over this period.

To account for the biodiversity uplift, the team used the UN’s System of Environmental-Economic Accounting (SEEA), combining the economic and environmental benefits that come from natural capital.

Regarding amenity value, access to outdoor space had become increasingly understood amid the 2020 Covid-19 pandemic lockdowns when the Irish population were restricted to a 5km radius of their homes. During this time, woodland access became vital to wellbeing. For example, Coillte saw a 250% uplift in footfall in some of their forests. To measure this value, the team used the Contingent Valuation Method, a survey-based economic technique that’s common for valuing non-market assets.

Once the benefits were assessed, BoI developed a model by which land acquisition, planting and light maintenance could be paid for through an income stream derived from selling the three benefits via a new instrument called Woodland Nature Credits, where the Nature Trust acts as the issuer and Bank of Ireland is the arranger.

The price of the Credits is inclusive of the land acquisition price; measurement and verification costs, as well as the assurance process that was run by KPMG. However, these sites also remain eligible for afforestation grants and the existing EU ‘premium’ payment programme that has driven afforestation in Ireland over the last 30 years. This public funding could cover the planting and management costs of the woodland. 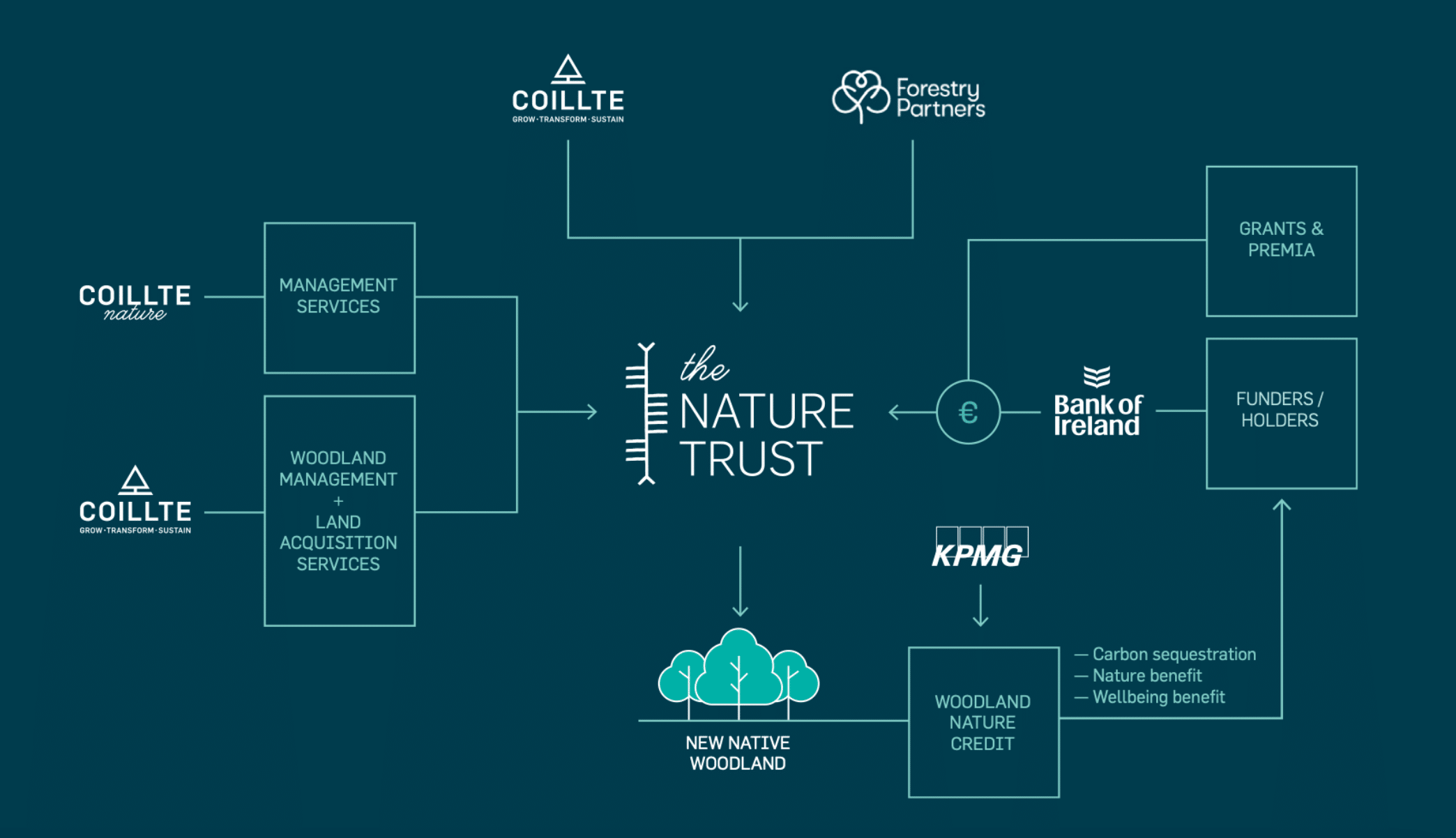 A total of €2 million of Credits was identified across five different sites, totalling 200 hectares across Ireland (about 600,000 trees). Land for reforestation was identified and acquired using upfront investment from the Nature Trust’s funders, who were later repaid. Harris says it was important to diversify the sites in order to spread the risk of any physical events, such as fire. A 20% buffer was also built into the Credits in case of non-performance.

The Credits meet the demand of corporates primarily seeking to offset carbon emissions while also looking to provide a positive biodiversity and social impact. Unlike traditional offsets, however, the initial product takes the form of an environmental coupon that then yields its Credits depending on performance. If carbon sequestration within the sites outperforms initial projections, the environmental coupon increases and the buyer can sell on any extra Credits yielded that it does not want to keep.

To further maximise demand, the Credits are aligned to the EU taxonomy and the Non-Financial Reporting Directive, as well as the upcoming Corporate Sustainability Reporting Directive (CSRD), a major driver in the EU corporate sustainability space. These directives set the standards for how companies publicly disclose the environmental and social impacts from their operations, therefore it was crucial to make sure that the Credits counted positively under these directives so that buyers had maximum value in terms of both their reportable metrics and their stakeholder engagement.

The Credits are the first instrument to combine carbon, biodiversity and amenity benefits under the EU taxonomy, says Harris who remarks that the taxonomy itself is “a structuring-friendly piece of legislation” and that its “clear and unambiguous nature” prevented any significant issues from aligning the deal’s terms and conditions.

Beyond the 25-year payment period of the Credits, the forests will remain undisturbed with only light maintenance for the proceeding 75 years through a declaration signed by the Nature Trust. Harris points out that in reality, the Trust will likely keep these forests in perpetuity,” as aligned with its original mission statement. Harris also stresses that buyers only own the environmental benefit. The trees and the land remain the property of the Nature Trust. In this way, the high social integrity of the deal is preserved. As evidence of this, the team were happy to see that the Nature Trust has continued to receive philanthropic funding, meaning more traditional forms of funding have not been crowded out or discouraged from backing the Nature Trust’s work.

Upon issuing the buyer memorandum, Harris says several companies were interested, although in the end AXA bought up the entire €2m.  The insurer intends to use the Credits towards offsetting the individual carbon emissions that its car insurance policy holders generate, including this in both their reporting requirements and their product offerings to customers.

Due to the demand in the first round of issuance, BoI are now developing a second round of €5m of Credits anticipated in early 2022. Harris says he is also keen to realise the full potential of this product, and he and his team are now exploring how the Credits could work for peatlands, seagrass and even tiny forests, such as those in urban settings.